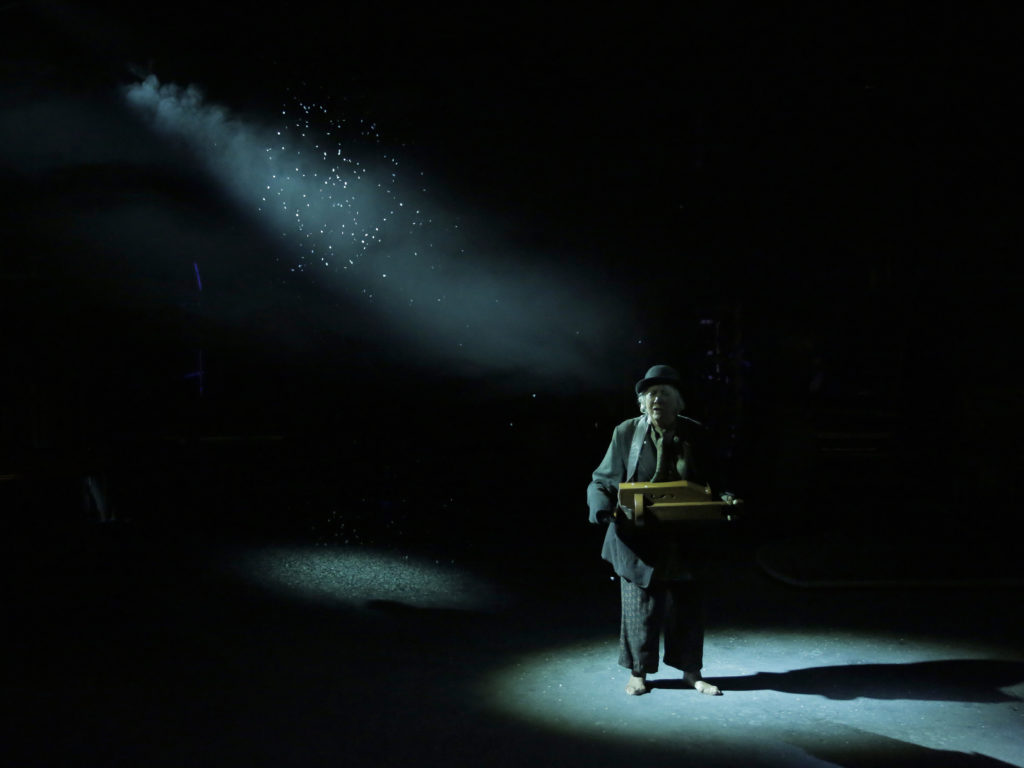 ★★★★ ‘brilliant … a pioneering piece of music-theatre’

Georg Büchner’s Woyzeck is one of the most seminal works of the 19th century. It has inspired an opera by Alban Berg, been the source of countless adaptations, including a recent one by Jack Thorne at the Old Vic, and been claimed by realists and expressionists alike. But – and this is a genuine first – it has now been fused with Schubert’s song cycle, Winterreise, to make an original piece of music-theatre. It could easily have fallen flat on its face. Instead, as adapted and directed by Conall Morrison in a production jointly staged by Landmark Productions and the Galway international arts festival and coming to the Barbican, London, in September, it brilliantly unites two works that are masterpieces in their own right.

You can see why Morrison wanted to fuse the two pieces. Woyzeck was left unfinished on Büchner’s death in 1837; Schubert was still working on corrections to Winterreise when he died in 1827. Woyzeck’s 24 scenes are matched by the 24 songs that make up Winterreise.

Both works also deal with anguish and torment. Woyzeck is a military barber driven to murder his common-law wife, Marie, while Winterreise, based on poems by Wilhelm Müller, records the pain of a heartbroken lover doomed to wander for eternity. If I had to pin down a key difference, I would say that Woyzeck has a jagged, fragmented quality that seems wholly modern while Schubert’s work embodies 19th-century German Romanticism but the juxtaposition is still intellectually and emotionally stimulating.

That is evident from the start when Rosaleen Linehan emerges from a stage that is a mountainscape of battered pianos (there are 103 all told) in the character of Hurdy-Gurdy Man. She sings a song that is the climax of Schubert’s cycle and that expresses a sense of the wheel of life endlessly turning. But there is a crucial difference in that here the character is seen subjectively rather than objectively: “Barefoot on the ice,” sings Linehan, “I stagger to and fro.” Not only that: phrases from the haunting song recur throughout the evening and at the end Patrick O’Kane’s Woyzeck joins Linehan in an invocation to “strangers in the wasteland” to join them on life’s repetitive journey. The effect is overwhelmingly moving.

For the most part, however, the action is driven by Büchner’s play, and Morrison’s production and O’Kane’s feverishly intense performance convey the sense that there is no hope for an exploited, working-class soldier like Woyzeck. His first line is, “This place is cursed”, and he himself seems doomed. He is patronised and humiliated by the Captain whose face he shaves with an ominous, cut-throat razor. He is treated as a guinea pig by a half-crazed Doctor who feeds him on a diet of peas. Above all, he is betrayed by Marie who is seduced by the sexual swagger of a Drum Major.

That becomes crucial in this production, which foregrounds the figure of Marie while also showing that she is the source of Woyzeck’s disintegration.

All that is reinforced by the adroit way Schubert’s songs are used. This is not like one of those dreaded jukebox musicals where the narrative has be steered in all sorts of directions to accommodate a procession of pop hits. Here the music springs organically from the action.

Woyzeck, driven crazy by starvation, has apocalyptic visions of a world going up in flames. That leads directly into the song (English lyrics by Stephen Clark) that begins: “I saw three suns set the sky ablaze / Who knows how long that they held my gaze.” But the songs don’t belong exclusively to Woyzeck. They are sung by other characters, including the Captain, the Drum Major and, most especially, Marie. As memorably played by Camille O’Sullivan, who suggests a conscience-stricken Carmen, she becomes as pivotal to the action as Woyzeck: an entrapped figure whose meditations on the woman taken in adultery in the Gospels are followed by the Schubert song, The Inn, in which there is no room for the weary traveller.

If it works, it is because Schubert’s songs, with their intimations of death and life’s endless struggle, coincide with and support the mood of Büchner’s play.

Conor Linehan’s musical direction and Jamie Vartan’s design, in which derelict pianos evoke the unstrung nature of the hero, are all of a piece with the concept. Alongside O’Kane and Sullivan, Morrison has also assembled a tip-top Irish cast in which Barry McGovern as the predatory, crow-like Doctor and Stephen Brennan as the condescending Captain stand out.

But what I shall long remember is the sight and sound of Rosaleen Linehan’s Hurdy-Gurdy Man as she sings, eyes staring into the far distance, of the cyclical and possibly futile nature of our existence. For one extraordinary moment Büchner and Schubert combine to foreshadow the world of Samuel Beckett and its inescapable vision of our terminal solitude.

Written by Michael Billington for The Guardian 20.07.17