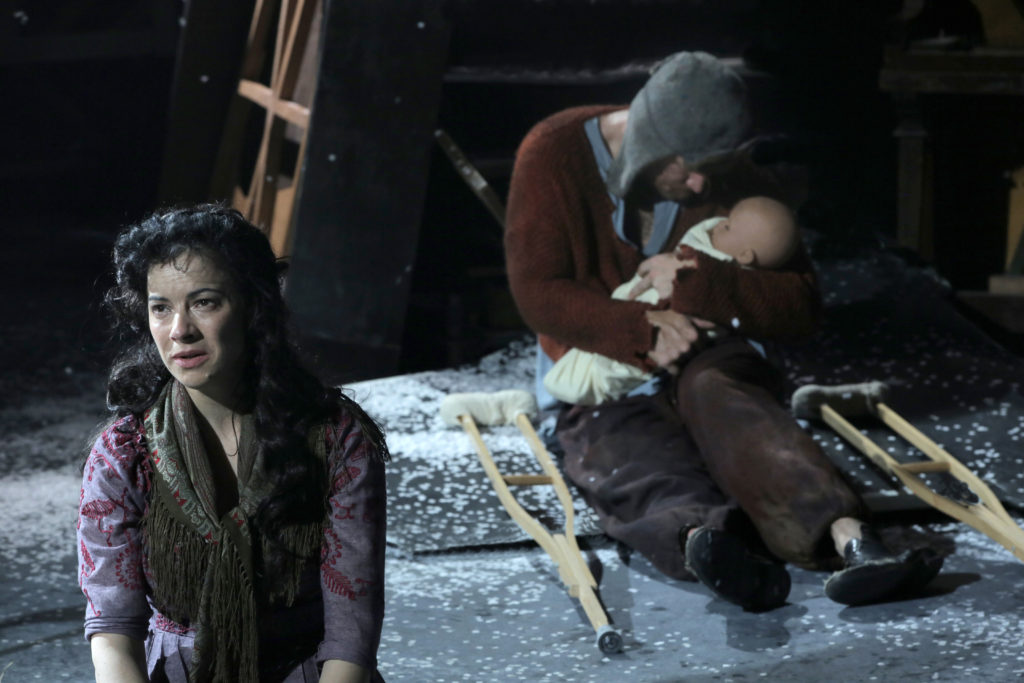 The private soldier Woyzeck is shaving his captain; the captain, pugnacious and patronising, is expounding on the nature of and requirement for virtue. And the soldier, not yet cowed, but teetering on the edge of insanity, replies: “You must be warm to be virtuous, sir.” But Woyzeck is not warm, and privation has skewed his sense of morality into a frenzy of savage emotional survival.

The poor do not inherit the earth, and Woyzeck knows it. Just as free thinking is inextricably linked to having a full stomach, and authority figures have always encouraged the meek to remain in subjection by keeping them hungry, desperation drives the disempowered to mindless brutality.

Woyzeck’s breaking point comes when his beautiful lover betrays him with the bombastic drum-major who so easily entices her with the gift of a tawdry piece of jewellery. Woyzeck can’t even afford that: he cannot even feed her and their child adequately. His solution is as bloody as it seems necessary to him: he takes her out and slashes her throat. The ghastliness of the morality tale would be profound delivered in dialogue. But given life within Schubert’s sublime Winterreise song cycle, with modern-day lyrics by Stephen Clark drawn from Wilhelm Muller’s originals, in themselves drawn from George Buchner’s play Woyzeck… itself written shortly before the author’s death at the age of 23… Woyzeck in Winter is more akin to opera than play, and all the better for it. Its grandiose melodrama is sweepingly harnessed and adapted into a searing whole by director Conall Morrison, who makes its horror as seemingly mundane as it is tragic.

In premiering it as a Festival production in co-operation with Landmark, Galway International Arts Festival has assured an immediate international audience, and it is already due to transfer to the Barbican in September and to the Dublin Theatre Festival in October.

Patrick O’Kane seems born to play the tortured Woyzeck, his spectacular singing voice combining with the equally spectacular acting talent displayed by Camille O’Sullivan as the treacherous, doomed Marie. With the two leads working as crossover artists, it is a dazzling achievement, and Stephen Brennan and Barry McGovern as the captain and the doctor who exploits Woyzeck’s misery are equally vocally impressive.

Rosaleen Linehan plays the Hurdy-Gurdy Man who “conducts” the tragedy with a surly fervour, and with Conor Linehan expressively at the piano, there is also faultless support from Susannah De Wrixon, Rory Nolan, Shane O’Reilly and Peter Coonan. There is a final star: Jamie Vartan’s set of a towering mountain of battered and broken pianos is nothing less than inspired.

Written by Emer O’Kelly for the Sunday Independent 24.07.17