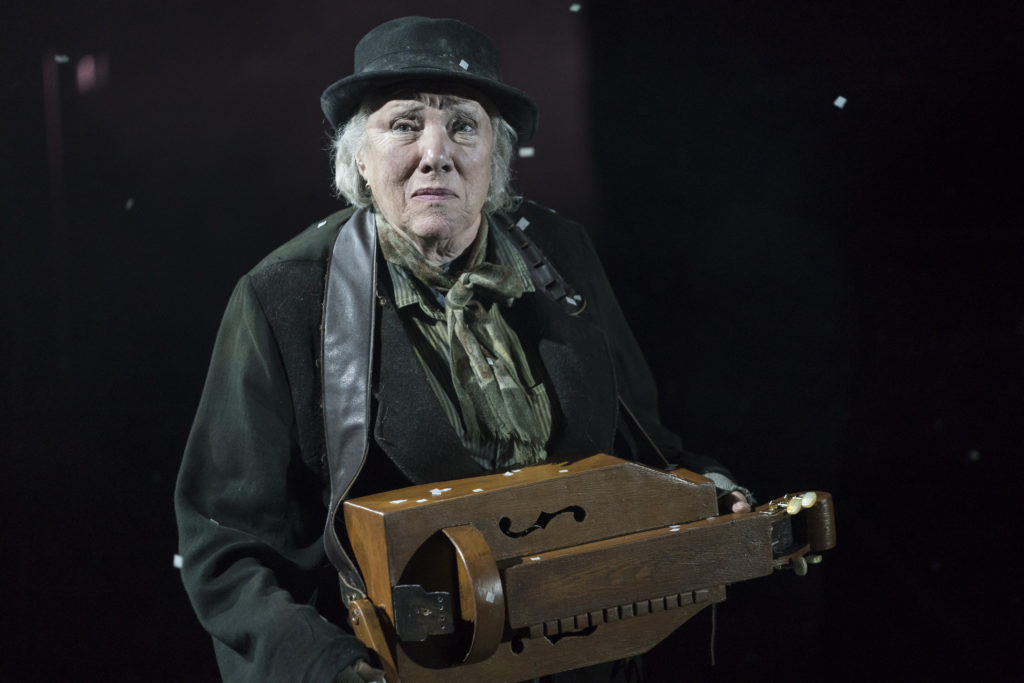 ‘a masterpiece of artistic inspiration …. a cast featuring many of Ireland’s finest … entrancing entertainment’

It sounds an unlikely combination but Irish director Conall Morrison proves that the idea of synthesising Woyzeck, Georg Büchner’s play about an archetypal victim, with Schubert’s song cycle Winterreise is a masterpiece of artistic inspiration.

The work has been lovingly created for Landmark Productions and Galway International Arts Festival with excellence in mind. A cast featuring many of Ireland’s finest combines with pianist Conor Linehan on a set that comprises keyboard instruments in varying stages of symbolic decay, in addition to his immaculately maintained and played Steinway.

Here, Patrick O’Kane portrays Franz Woyzeck, a squaddie condemned to a squalid life, despite his desire to be a good and happy person.

Smoky chanteuse Camille O’Sullivan leaves the cabaret stage to take the role of Marie, the central figure’s lady love and mother of his babe in arms. Unfortunately, she is also attached, if not necessarily attracted, to others including Peter Coonan’s pompous drum major.

Not only is Franz unlucky in love, he doesn’t fare too well in any other aspect of life. His mentor is Stephen Brennan’s Captain, a critical man who offers little encouragement but unrewarded labour.

A quack, played by Barry McGovern, tortures him in the name of dubious scientific experimentation, while the world seems intent on humiliating a man who is condemned before his story even commences.

This is relatively familiar fare due to the popularity of what has proved to be a timeless play but still proves poignant in this Irish-slanted version.

It takes off thanks to the interleaving of a working man’s tragedy with Schubert’s parallel, tastefully and appropriately translated by Stephen Clark. This is sung feelingly by a cast that additionally includes Rosaleen Linehan as a mournful Hurdy Gurdy Man. Their efforts would not necessarily impress Schubertian aficionados or pass muster on a concert stage but serve this lovely evening ideally, conveying the grittiness of Woyzeck’s through the voices of the actor-singers.

In summary, Woyzeck in Winter provides a novel but deeply satisfying 1¾ hours of entrancing entertainment.