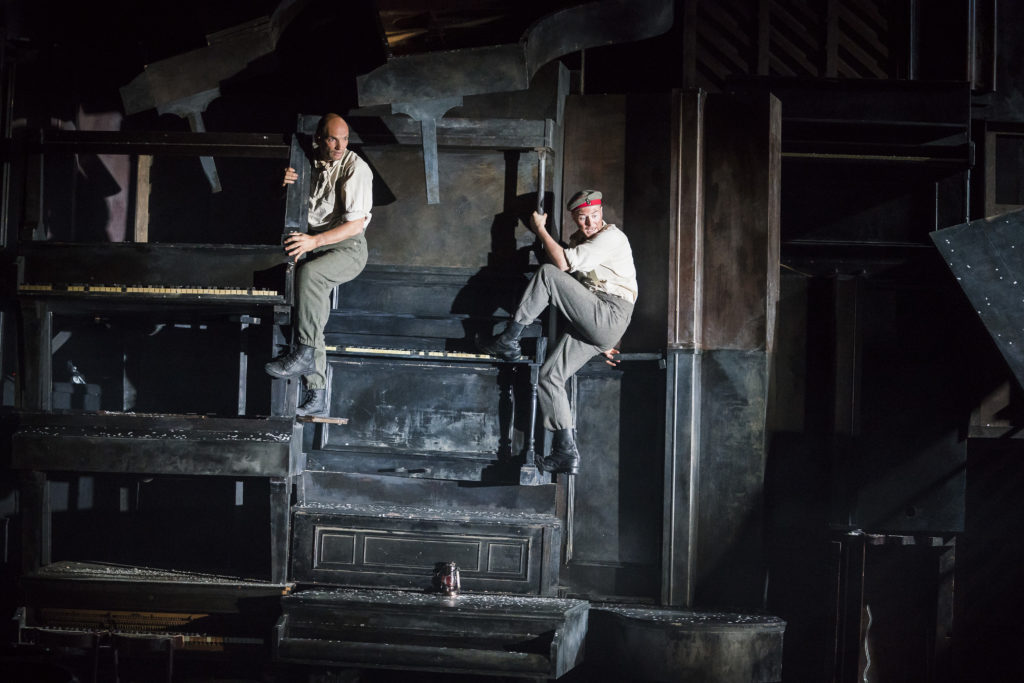 It’s a beautiful sunny evening in Galway; inside the theatre a light shower of snow falls. A dazzling design by Jamie Vartan dominates this big show, with a massive installation of wrecked pianos creating a multi-tiered playing space, full of idiosyncratic possibility. There is one functioning piano, and musical director Conor Linehan plays it live throughout.

Presented by Landmark Productions and the Galway International Arts Festival, Conall Morrison has adapted and directed this fusion of Georg Büchner’s play Woyzeck and Franz Schubert’s song cycle for piano Winterreise for the 40th anniversary of the Galway arts extravaganza.

The sources date from the 1820s and 1830s and Joan O’Clery’s handsome costumes have the characters perfectly kitted out for a Dickensian winter.

Patrick O’Kane as Woyzeck combines vulnerability with strong presence and evokes much empathy as he is buffeted about by a quack doctor (Barry McGovern in top form and a top hat) who keeps diagnosing him with preposterous illnesses. He is goaded and teased by his military comrades about what the Drum Major (Peter Coonan, full of delightful, pompous bluff) is up to with his missus. His common-law wife Marie, is a sinuous, velvet-voiced Camille O’Sullivan.

So all is splendidly done: costumed, sung, performed, and there are pianos to the rafters. But what of the central narrative objective? Woyzeck is a man who kills his beautiful lover, the mother of his child, in a fit of jealousy because she has relations with another man. The two central characters set out to win the hearts of the audience and both O’Kane and O’Sullivan give turbo-charged performances. But the play, the music, are all working to excavate Woyzeck’s suffering and sorrow and complications; the show is eerily reminiscent of soft newspaper articles seeking to understand why family men inexplicably kill their loved ones. The snow falls again at the end, spreading plenty of chill.

Written by Katy Hayes for the Irish Independent 23.07.17